This comic has been inspired by my obsessive watching lately of ‘Life Below Zero’ – a documentary about people living in Alaska – on Netflix. My inner misanthropist (not so inner really) loves the idea of living alone in a cabin in the far far north, with a wood stove and a sauna and lots of books. My inner realist on the other hand knows that I wouldn’t be able to kill an animal and would therefore starve/be eaten by bears in about three minutes. So I’m having to content myself with daydreaming and drawing comics about it instead! Click on the image if you want to see it a bit closer up. 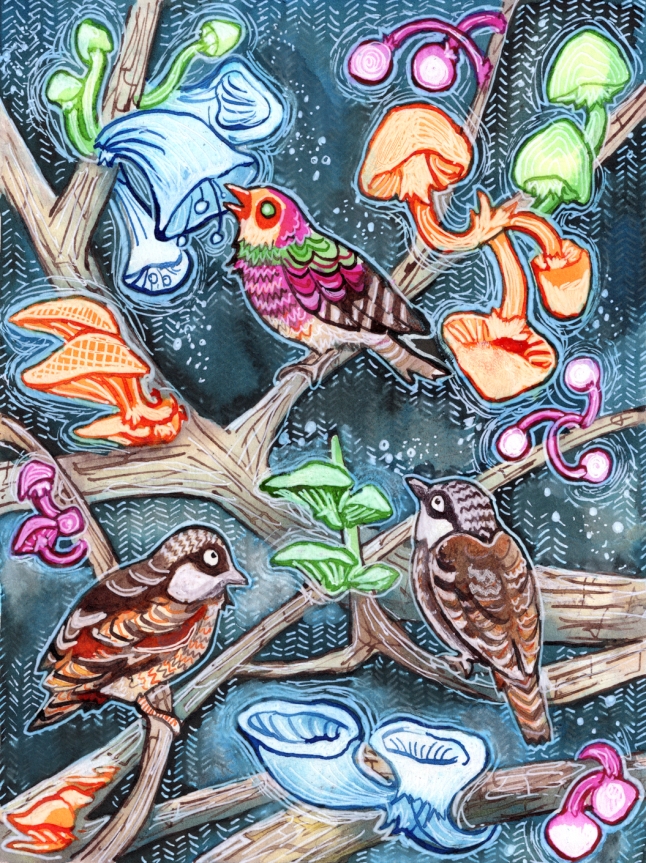 Welcome aboard the starship Universe, a craft dedicated to cleaning up space junk using its powerful gravitational field!

Heavily inspired by http://animalssittingoncapybaras.tumblr.com/, which I’ve spent far too much of my time looking at this morning.

I started using my own ancient Tumblr account again yesterday and I think that instead of the useful business tool I’d like it to be it’s going to be mostly a way of wasting hours staring at cat GIFs.

Capybara tower is available as a print on Society 6!

Available as a print on Society 6

I made a stupid non-sensical comic thing! Because I can’t summon the energy to be more productive at this time of year.

It’s about a watery cat who leaves puddles behind him and a dog who’s compelled to mop them all up. I was going to print it out and make it into a little book, just for practise like – but I don’t have any printer paper left. So I’ll just dump it here for now!

I wish my dog did housework. 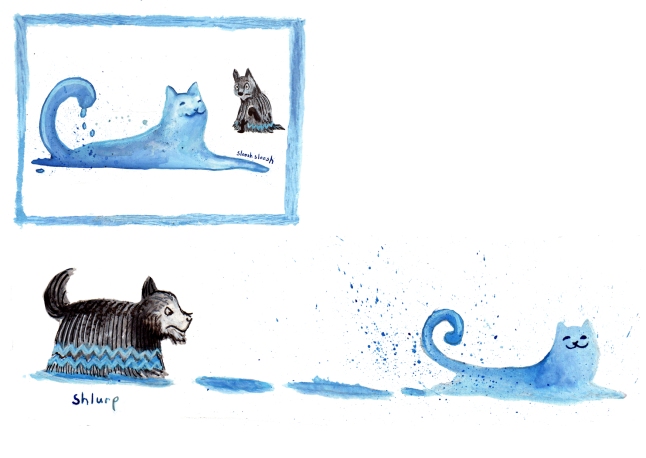 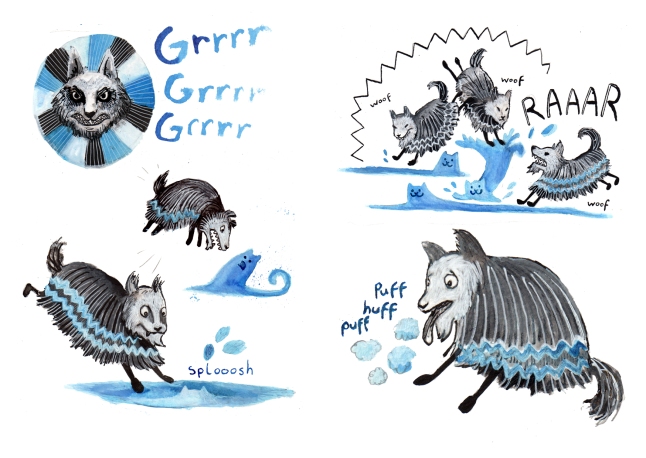 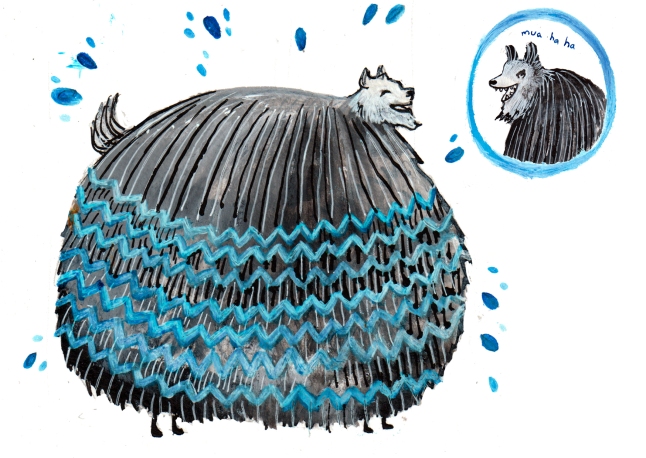 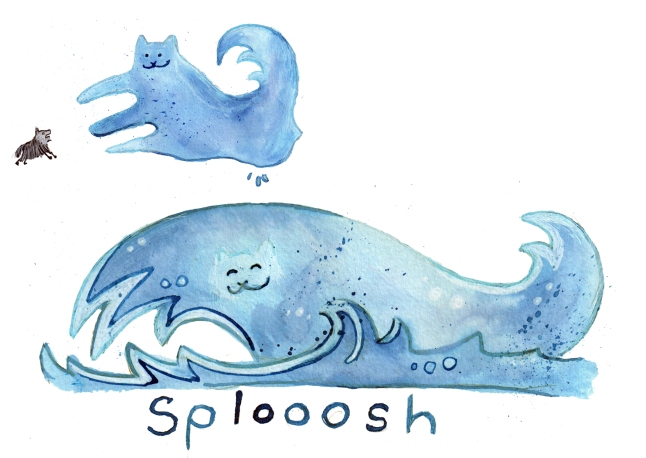 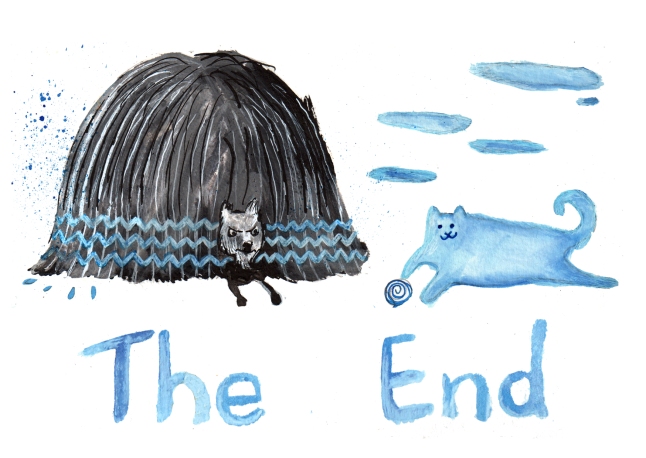 The really bad one… Christmas! I made my rare-scottish-wildlife themed Christmas drawings into Christmas cards, so you can send them to people if you like. You can buy them on Etsy here.

The greyhound cards that I made last year and never got around to putting online are up on Etsy too now! Progress. 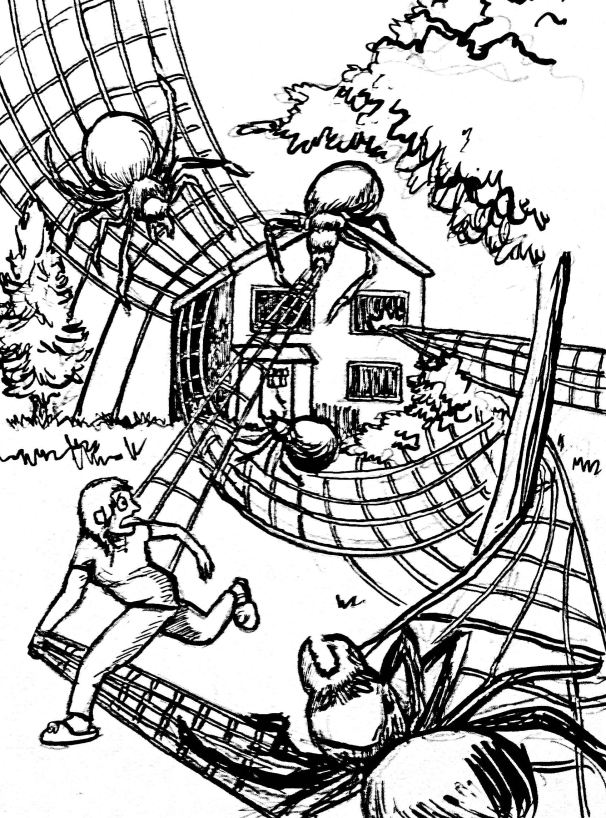 EVERYBODY PANIC! A wave of DEADLY spiders has INVADED the UK!! VENOMOUS false widow spiders have KILLED… well, nobody. But they gave a man a nasty BRUISE!!! AAAAARGH!!!!

Just a stupid scribble for Illustration Friday this week, because spider hysteria is amusing me and it kind of fits the theme (but I don’t really have time to do anything better)!

But I’m already feeling a bit Christmassy. So here’s some festive rare Scottish wildlife hiding in a Christmas tree to make you feel depressed/excited (delete as appropriate) about the incoming holiday season. Yay! 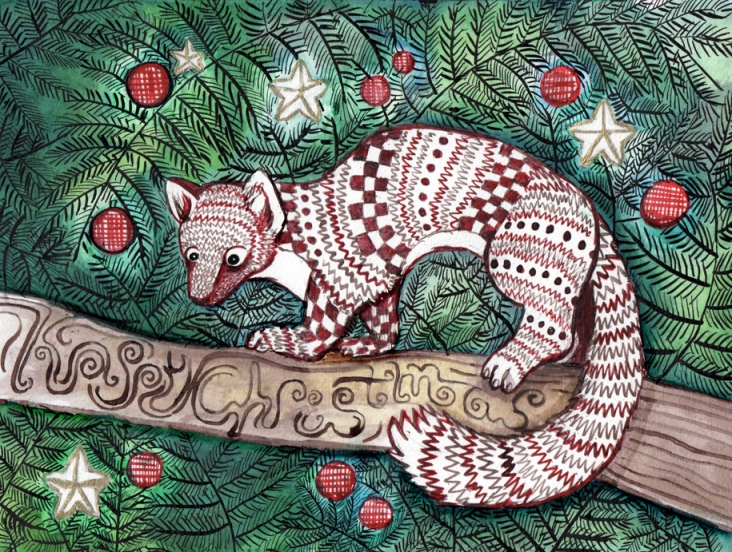 Once upon a time there was a village, populated by a totemistic society. People there were defined by their totem animals and objects, and their lives were mapped out by the spirit that chose them. The teacher’s totem was an owl, of course; the policeman’s a dog (a bichon frise actually, but he didn’t tell anyone that), and the accountant’s was a pocket calculator. In the whole town, there was only one man whose totem was unknown: Marvin the Terrifying. The villagers didn’t know if it was because he didn’t have one (and therefore, had no soul) or if it was because his totem was something so terrifying that he wouldn’t speak of it – either way Marvin never volunteered the information, and they were scared of him.

Despite this, Marvin the Terrifying had the most important job in the village. Every autumn, when the last of the blackberries had been eaten or rotted away, he took the children who’d just finished school into the forest to discover for themselves what their totem would be.

The forest was dark, cold, and unforgiving; there were strange noises and shapes, and unknown things watched them from the shadows. One by one the children, who had hoped for totems of wolves, lions, and space rockets, left the forest.

Usually this didn’t take very long. A couple of hours in the bleakness of the dying wood was enough for most of the children, who accepted their meek totems (usually dogs or mice) with a bit of disappointment but mostly, by that point, relief.

But one year there was a child who changed everything for Marvin; the year of his last ever totem walk…

All images posted on this blog are copyright to Aimee Lockwood and are not to be reproduced or modified in any way without prior consent.
aimeelockwood
Blog at WordPress.com.
Loading Comments...